This Video Series from CCC includes

Nicholas, Juan Diego, My Secret Friend, Bernadette, The Day the Sun Danced, Francis Xavier, Ben-Hur, Patrick, and St. Francis.  I did notice they did just change their DVD cover design. Movies are 30 minutes long.  You can buy the whole set here.  Individual details below. 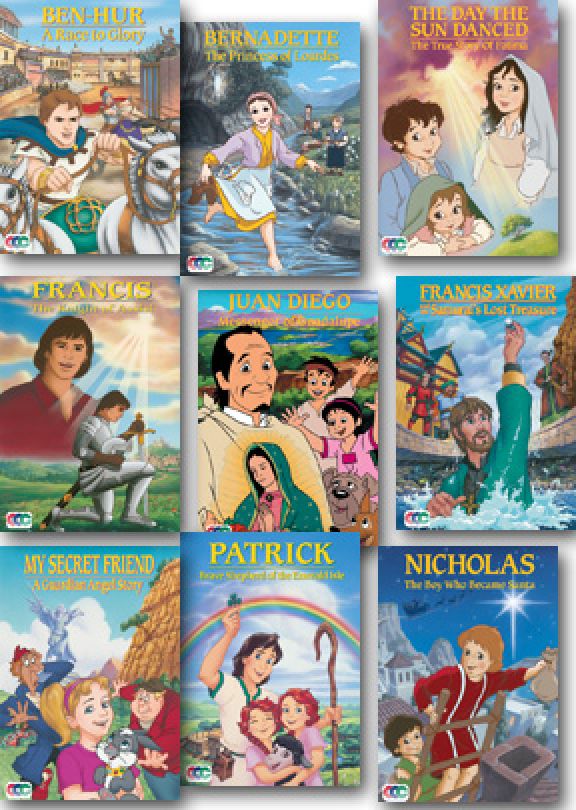 Nicholas: The Boy Who Became Santa -- Nicholas was still a child when he discovered a very special secret that changed his life forever. It was the gift of giving, by which he brought happiness to many people. More than sixteen centuries later, the entire world celebrates the kindness and generosity of the man we call Santa Claus. A beautifully animated film based on historical facts and traditions.
FEAST: DEC 6
D. 343


Juan Diego: Messenger Of Guadalupe -- This insightful film, made for television, tells the story of the appearance of Our Lady of Guadalupe to the humble Aztec Juan Diego in Mexico in 1531. It vividly portrays the rich faith of the Mexican people and the great devotion at the Shrine of Our Lady of Guadalupe where Juan Diego's cloak still hangs with the miraculous image of Mary imprinted on it.
JUAN DIEGO FEAST: DEC 9
D. 1548
OUR LADY OF GUADALUPE FEAST DEC. 12

My Secret Friend: A Guardian Angel Story -- Little Angie was sure she had a guardian angel, but when her brother Danny made fun of her she began to wonder. Then, on their family vacation, something happened that made the question very important indeed. An unforgettable lesson about heaven's special gift to each of us -- our very own angel.
FEAST OF THE GUARDIAN ANGELS: OCT 2


Bernadette: The Princess Of Lourdes -- With wonderful color animation, this film gives a lively and inspiring account of the moving story of Our Lady's appearances to little Bernadette, the trials and misunderstandings that she faced, the important spiritual messages of Mary, and the wonderful miracle she performed at Lourdes. Highly recommended for young people.
FEAST: APR 16
D. 1879
OUR LADY OF LOURDES FEAST DAY: FEB 11


The Day The Sun Danced: The True Story Of Fatima --With outstanding animation, this program accurately portrays the story of Our Lady's appearances to the three children in 1917. From the angel's appearance to the Miracle of the Sun, the full story is so captivatingly presented that young viewers will want to watch it again and again.
FEAST OF OUR LADY OF FATIMA (1917): MAY 13
BL FRANCISCO MARTO FEAST: FEB 20
BL JACINTA MARTO FEAST: FEB 20


Francis Xavier And The Samurai's Lost Treasure --Francis became a missionary to the farthest reaches of the world. He saved pearl divers, stood off pirates, and quested with a mysterious samurai warrior in search of hidden treasure. This animated story captures the spirit of a daring man in amazing adventures of courage and faith.
FEAST: DEC 3
D. 1552


Ben-Hur: A Race To Glory -- Young Ben-Hur and Messala were the best of friends. They loved to race chariots. One day, Messala had to leave Jerusalem and his Jewish friend to study in Rome and become a Roman officer. When Messala came back, the boyhood friends were now men, but friends no longer. Messala falsely imprisoned Ben-Hur's family and sent him to the galleys. But Ben-Hur survived, and he returned, seeking his family — and Messala. The former friends squared off for one last, desperate chariot race.
1st CENTURY


Patrick: Brave Shepherd Of The Emerald Isle -- 16-year-old, fun-loving Patrick had it easy until the day raiders kidnapped him and brought him to nearby Ireland. To survive, he’d have to conquer cold, hunger, wild beasts, and even worse enemies. Turning to God for new strength, he began an incredible saga of faith against which no enemy would ever prevail.
FEAST: MAR 17
D. 461


St. Francis: Knight Of Assisi -- It was the age of the knights and kings, when honor belong to the heroes and glory was found in the battlefield. There lived a brave young man named Francis, whose wish was to become a mighty warrior and conquer a magnificent castle. One day Francis felt a calling to greater glory. God had vested upon him a very special mission that would require a supreme act of courage. For the love of God, his King, Francis gave up all that he had and joyfully embarked upon the most exciting and unexpected adventure.
FEAST: OCT 4
D. 1226