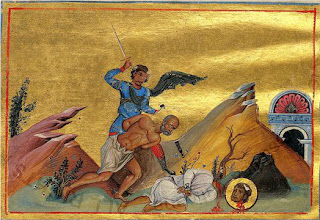 Eubulus had traveled with Adrian of Batanea to visit and minister to the Christian congregation in Caesarea. Upon arrival at the gates they were asked their purpose and told the truth, for which they were immediately imprisoned by the guards, under the orders of Governor Firmilian,who had them tortured. On March 5, Adrian was thrown to a lion in the Amphitheatre. The lion mauled but did not kill him. Adrian was then dispatched with a sword. Two days later the judge who condemned Eubulus to the same fate offered him the opportunity to go free if he sacrificed to an idol. Eubulus refused, and was martyred, meeting the same fate. (from Wiki)

Sts. Adrian and Eubulus, pray for us!